Photos From Our RSES Adventures. Vol.1

As part of our annual Student Conference, this year we held our first ever RSES Photography Competition! Over the coming months we are going to be sharing with you some of these photos, and the stories and science behind them.

This week we start on a high with the winning images from our three categories; Where We Go, Who We Are and What We Study, as well as the overall winner. Enjoy!

The photo was taken in August 2014 during a trip to Ladakh in the Indian Himalaya with Dr. Marnie Forster.  We were undertaking geological mapping and structural analysis of shear zones related to the exhumation of UHP coesite-bearing eclogites.  One night, camping by Tso Kar lake (4500 m), I opened my tent, and the sky was amazingly clear, and the Milky Way looked pretty special.  The lamp was still on in the kitchen tent… so I balanced my camera on a rock and took a long exposure photo.

This photo was taken during a day trip for the Urbino Summer School in Paleoclimatology in Italy. We were looking for evidence of palaeoenvironmental change in the geological record and the Bonarelli Event (OAE2) is a perfect example. It’s an anoxic extinction event during the Creataceous period. With the oceans being starved of oxygen, the mass extinction of organisms occurred which then formed the organic rich dark layers of shales seen in the photo. This extinction event is used as time marker to form the boundary of the Cenomanian and Turonian ages about ~93Ma.

In the photo, you can see a keen palaeoclimatologist looking at the shales as she tries to piece together the Bonarelli Event stratigraphy. 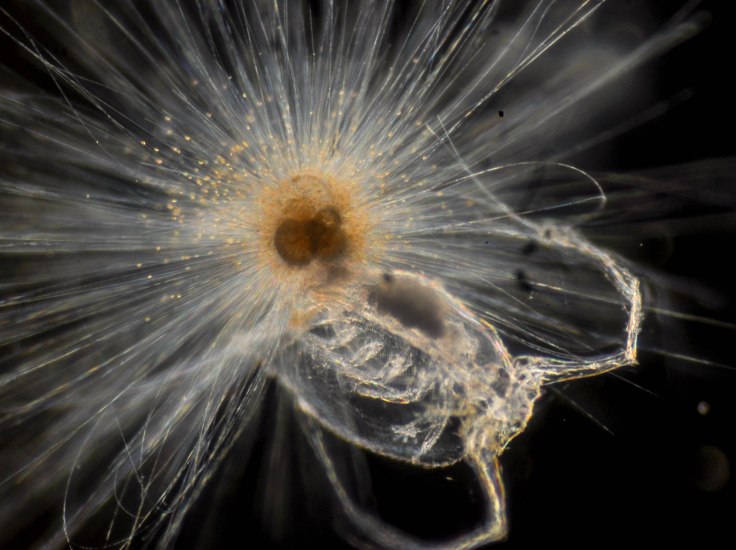 This photograph captures a life-or-death struggle between two ferocious sea-beasts, both are less than a millimetre long.

In the upper left is the foraminifera Orbulina universa. This complex tangle of spines is formed by a single-celled organism, much like an amoeba. The object that looks like a piece of popcorn in the centre of the spines is a porous calcite (calcium carbonate) shell that the foraminifera makes and lives around. Each of the spines protruding from the central shell is a single crystal of calcite, with a thin tendril of the cell running up it. The golden dots along these spines are photosynthetic microbes that live in these extended tendrils, which the cell “farms” for food.

In the lower right is a calanoid copepod, a microscopic crustacean. This complex, multi-cellular beast is a powerful, ambush predator. It has two sets of antennae crammed with tactile and chemical sensors, finely tuned for detecting prey and avoiding predators. The antennae also act as its main form of propulsion, allowing it to zip through the water with surprising speed. Its compact, transparent body has five pairs of legs, a heart and a central nervous system.

The copepod doesn’t stand a chance in this encounter. Besides being a benevolent farmer, Orbulina universa is also a voracious predator, capable of catching and consuming prey many times its size. The foraminifera does not hunt actively, but sticky tendrils out beyond the tips of its spines can act like a microscopic, drifting cobweb – a trap for an unsuspecting visitor like the copepod. This copepod was completely devoured in just a few hours.

This photo was taken on a very windy, cold and wet, early August 2016 morning – on an impromptu road trip down the Great Ocean Road. After capturing the sunrise over Island Arch, I took up a spot on the cliff over Loch Ard Gorge, set up my tripod and captured a series of long exposure shots. Using a very dark filter, I calmed the rough seas to give a great look at what was under the crashing waves.

Up Next: The People’s Choice Winners!

People, PhD Life, What We Do